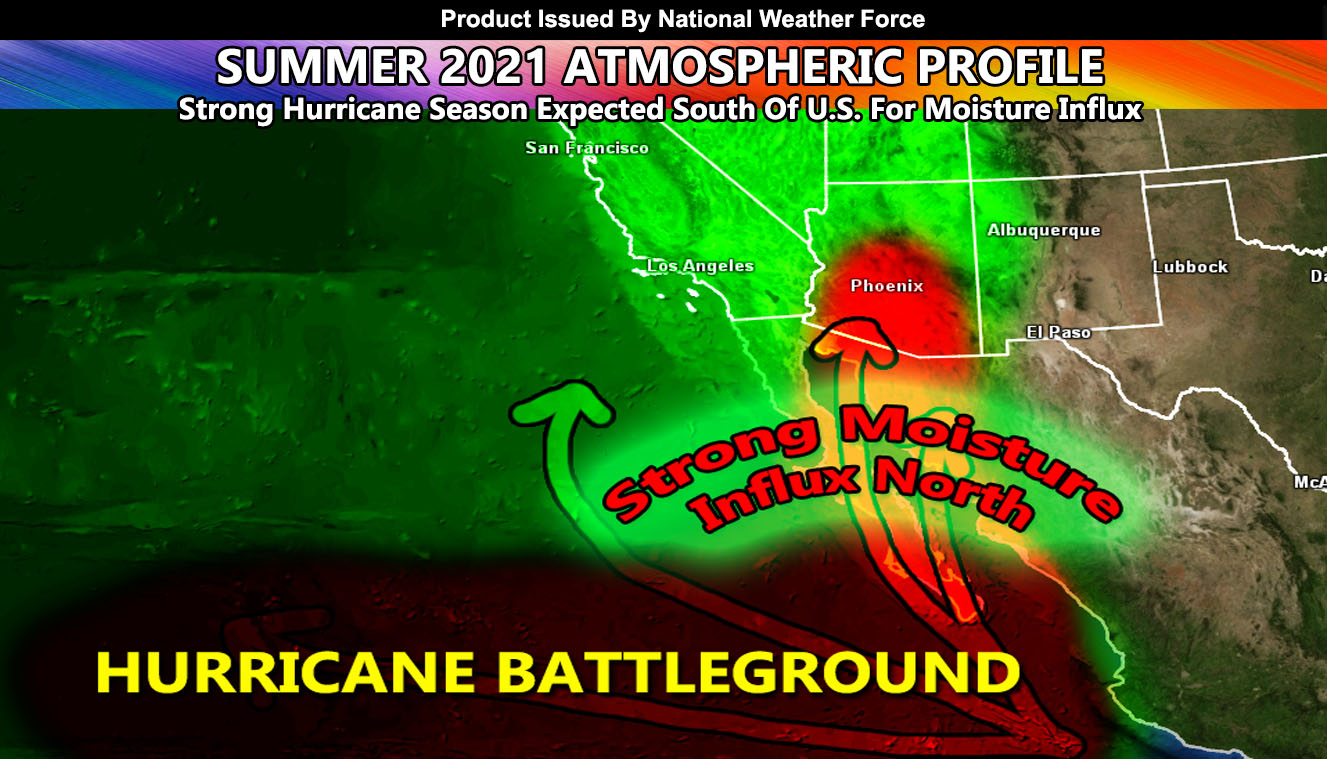 Last summer we had a building La Nina, which meant fewer hurricanes south of here for a terribly dry monsoon season and extremely hot temperatures.  This summer however the La Nina has officially faded to neutral, which means the Eastern Pacific Hurricane Season will go down as one of the most active seasons on record, bringing up multiple shots of moisture and upper dynamics to the Southwest United States for active monsoon periods so read on for details …

PRECIPITATION:  Last summer at Southern California Weather Force, my forecast for the Summer was hotter than normal and drier due to the lack of Eastern Pacific Hurricanes I expected.  This is something I should have carried into Arizona as well and a lesson learned from that as it seems both Arizona and California speak the same weather language during the summer forecast.  So, with that being said, both California, Nevada, and Arizona will have an average to above-average monsoon period.

I do expect this month (June) to have above-normal temperatures, especially in Central/Northern California and Nevada, including Death Valley.  But this is all set up for the four corners ridge to build early.  That’s right, the four-corners ridge responsible for the Southwestern United States Monsoon will try to build in on time, mid-June.  We’ve seen this build in very late in the season, but this season will be different.  We should have a hot and dry start this month for most of the region.  We could see shots of storms through the Arizona metro areas of Phoenix and Tucson during mid-month on the ridge build, but overall we will have to wait a bit longer for that to fully form.

Two named tropical systems have already happened and it is only the first week of June.  Blanca was the last one and has since dropped to a tropical depression.  Having two systems this early signals what I’ve been saying for months … we are in for an active season down there.  As hurricanes form west of Mexico, moisture within the outflow gets shoved northward towards our area.  Of course, Arizona will always get the most activity, but the ridge shoving moisture eastward into Southern California will be in place this time, especially in July.  This season however will be one where it fluctuates by month.  I see July being active, but between then and September we will see a dry spell … then get whacked again towards the end of Monsoon Season.  Monsoon Season goes from June 15th to September 15th.

TEMPERATURES:  With the lack of monsoon flow, temperatures in June will be above average.  As the flow is building, this above-average will actually wan down through the Summer.  As we get moisture, showers, storms, or clouds through the Southwestern United States I expect most of the region will see average to even below average Summer temperatures.  This will not be the hellish summer that 2020 brought,  The exception of this would be Los Angeles, Ventura, Santa Barbara, San Luis Obispo County due to being further west of most of the monsoon flow intrusions.  Most of your days will be capable of heatwave level events, however, I will illiterate that this summer will not be as hot as last summer and will go down as an average rank summer, neither the coldest nor the hottest.  The exception for the colder rank would be the Eastern half of Arizona from north to the south state.  These areas deep in the monsoon flow will make it that temperature ranks will bring a colder temperature average in those areas.

GET EMAIL ALERTS AND ENTER THE MEMBER SECTION ON THE SITE:  Both Southern California Weather Force and Arizona Weather Force have a cheap Summer 2021 discount to supercharge this service you already get on social media for free.  If you do not want to miss any articles this season because social media does not show you for hours or even days (common) and want to get custom email alerts such as thunderstorm, severe thunderstorm, flood, heat, or tornado alerts along with a controllable member section model for each during the events in YOUR area, sign-up for the premium member package, which is only $10 for the Summer.   Read below for details on how to join this offer.

REMEMBER… your continued want for this service is what keeps the server running and paid for.  A big bill is coming in the Fall and if I can get enough signed up this Summer, I can extend everyone’s Summer 2021 package through September.  Thanks for your help!

So that is it, an interesting Summer to come where I’ll finally be active on both sites, issuing alerts and long-range forecasts for temperatures and the Southwest Monsoon.  Get your memberships squared away above and welcome to SCWF and AZWF …