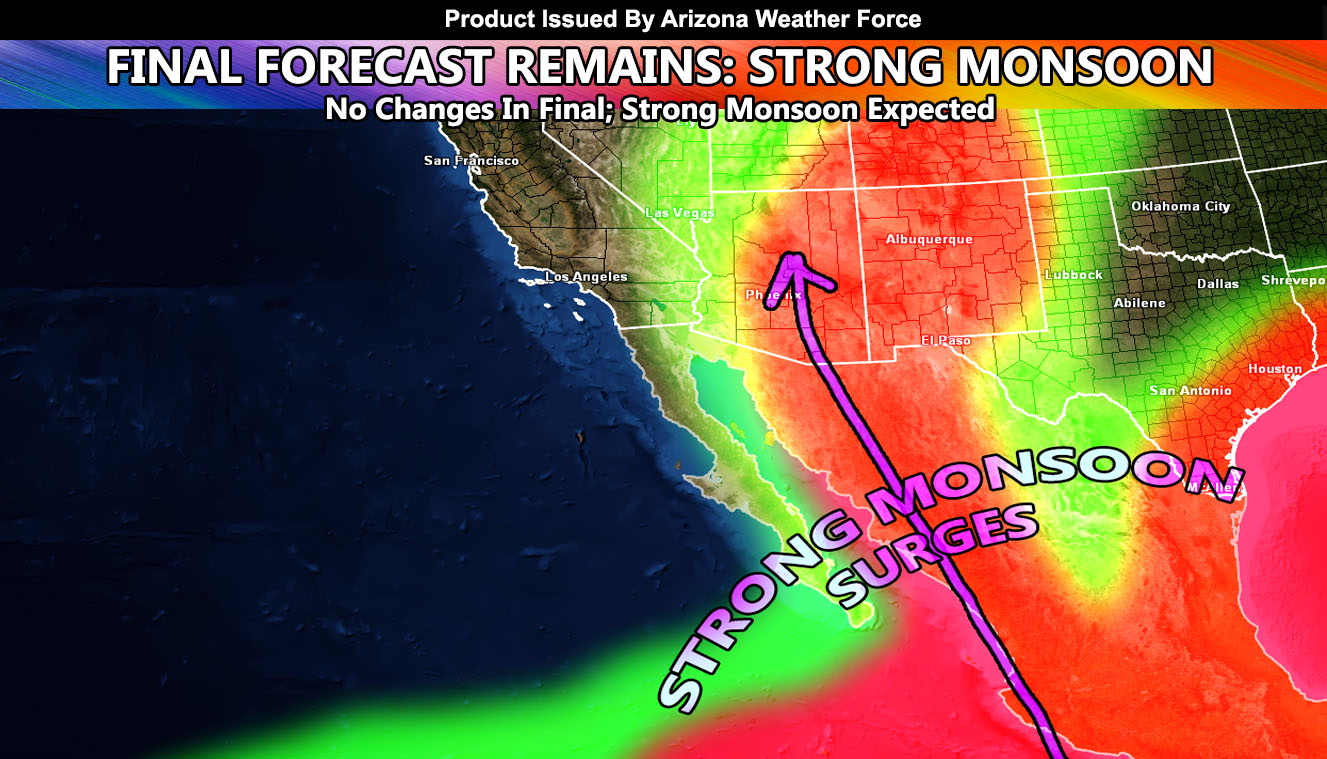 A weakening La Nina Pattern suggest that the 2022 monsoon season will be a stronger one yet again so read on for details as absolutely nothing has changed since my initial prediction last year on this … Since Arizona Weather Force went above average last year for the monsoon and the others in the field did not, it is a wise decision to continue to follow the future forecasts as the storms start.  This June 2022 update is the last update with a little surprise as well.  The fundraiser did make enough for me to open the e-mail alert system and member section for every single one of you reading this for the Summer as a test of community to see what can happen in the coming seasons as more join the community member section so read on for details and get your memberships and set your zones up today in the link below and within …

A personal note:  I’d like to say thank you to all that chipped into the fundraiser at this link  – https://www.gofundme.com/f/make-this-weather-service-free-for-everyone
This was a task to see if the community would help one another out in making it possible for this to be free for everyone.  If you are a current paying supporter whether seasonal or monthly, you will have additional information sent to your e-mail on addons and options.  Once again, thank you, and you should all thank each other for working together to open this up for everyone.  You all did it together and I hope to see more of that in the future to come should the community membership remain.

Back-to-back monsoon seasons that are as strong as the 2021 season are extremely rare.  However, projections are that a weakening La Nina will keep the Eastern Pacific Hurricane Season above average again, similar to last year.  The early numbers of mine suggests that it will extend further west as well into Southern California more-so than last year.  The combination of a strong Gulf of Mexico Hurricane Season (my numbers) and a four corners ridge bringing the Eastern Pacific Hurricanes northwest, southwest of Cabo, suggests strong upper dynamics from both the Gulf of Mexico activity and the Eastern Pacific Activity.

Some of my numbers suggest that it will start earlier in the states than usual.  Monsoon season is not by dew point anymore but the dates are set from June 15th through September 30th each year.  We rarely see a good surge in June, but this year looks like an exception as the monsoon should be an earlier start.

Given the state of the current La Nina, the strongest months will be July and August but leaning on July or August I’ll lean toward July at this time with both those months doing very well –

So that is it, we have a La Nina Monsoon Season coming up, which usually bodes well, as we had last year … Those wishing for rain will have it in large amounts so you should already start preparing this month for the coming surges.  Some will even wish it would stop, but remember, Arizona Weather Force has the tools and models to get you notified ahead of time, get an Xray into the severity and location of such systems, and keep you well ahead of the storm with Flood, Severe, Enhanced Severe, and even the chance of those rare Tornado Watches …