July 2021 Forecast For Arizona; Opposite Weather From June With All Metros Above Average In Precipitation; Details 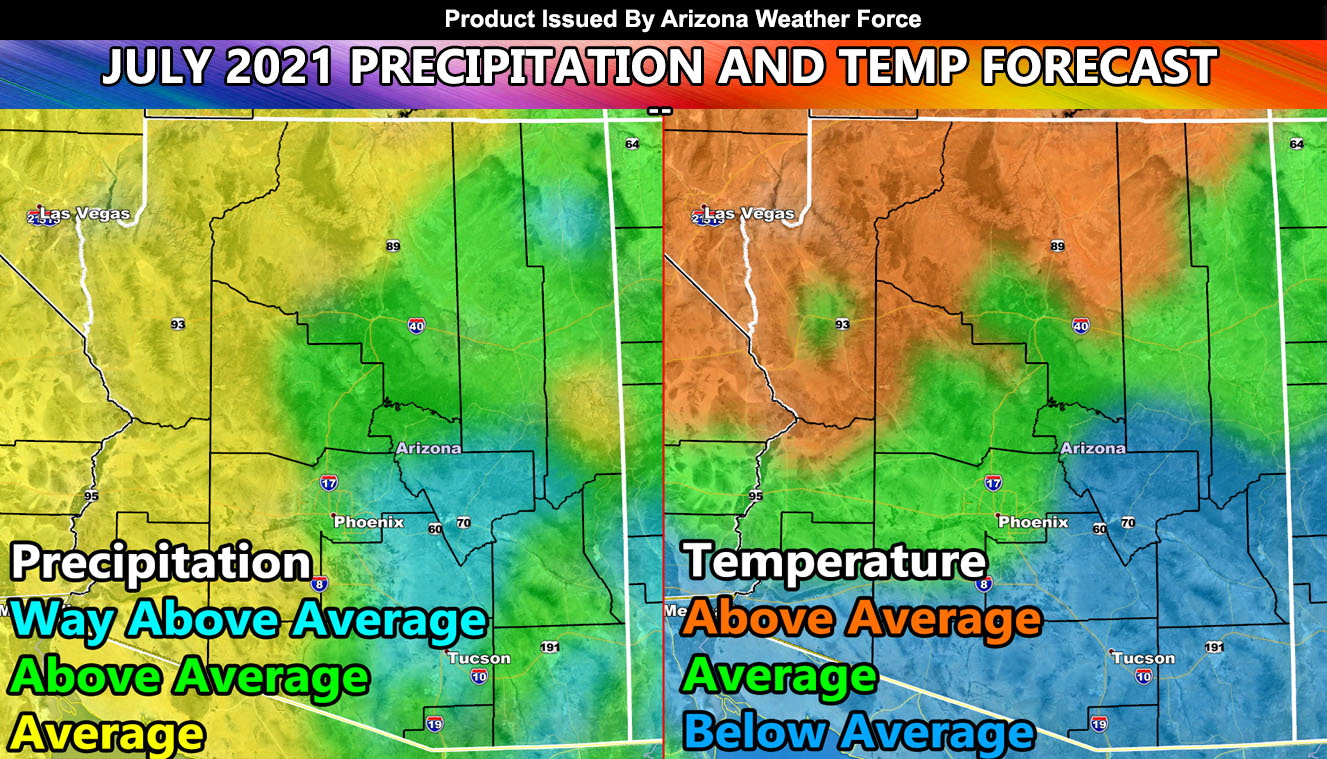 The monsoon is starting to become more active across the state of Arizona, and it will continue to strengthen as this month moves along.  The atmospheric profile has a number of low-pressure systems west of California.  This in return would work with the four corners ridge and split the state in half, with the Central/Eastern half having above-average rainfall and the western end having average rainfall.  As the original forecast for the monsoon had (click here), July would be an active month for once and have below-average temperatures in areas the monsoon moisture affects.

One thing many people need to understand is the metro areas do not get daily storms during monsoon season.  So just because your backyard is not receiving rainfall and you live in Phoenix or Tucson, does not mean in one way that my forecast is wrong.  The main areas during the monsoon are the mountain areas.  At times, an easterly component will shove the storms west to Tucson and Phoenix.  Tucson has the better chances because that area is closer to the moisture and lift source, with the mountains being close.  Phoenix is further from the lifting sources, the closest is Cave Creek’s forecast area, closer to the mountains.  Flagstaff is in the mountains so you do get a lot of storms during the monsoon season.  That is how it will be this season where Tucson will be number one, Flagstaff number two, and Phoenix number three in storm rank.

In response to the increased moisture, high temperatures over 115F+ will be hard to come by this month.  Higher dewpoints generally bring the high temperatures down, but the humidity levels up.  It will be very uncomfortable with the heat index out there.  So the temperature averages will be below average for South/Southeast Arizona, and Average for Phoenix as a result.  It looks like the ridge will form for deeper moisture by the middle of this month.  My last forecast went till July 10th, but I will need to update it for the mid-month activity.  You have your notice on what July will bring, and it is definitely a monsoon-infested month.

NEW FLAT RATE TIER PROGRAM – GET CUSTOM EMAIL WEATHER ALERTS IN YOUR AREA AND ENTER THE MEMBER SECTION ON THE SITE:  Summer 2021 rates – If you get in after June 1st it is only $10, if after July 1st only $6. If after August 1st only $3 to finish off the Summer Quarterly Tier.  Fall, Winter, and Spring will have their own tiers.

Both Southern California Weather Force and Arizona Weather Force have a cheap Summer 2021 discount to supercharge this service you already get on social media for free.  If you do not want to miss any articles this season because social media does not show you for hours or even days (common) and want to get custom email alerts such as thunderstorm, severe thunderstorm, flood, heat, or tornado alerts along with a controllable member section model for each during the events in YOUR area, sign-up for the premium member package, which is only $10 for the Summer.   Read below for details on how to join this offer.

REMEMBER… your continued want for this service is what keeps the server running and paid for.  Thanks for your help!