October 2022 Forecast For The Southwestern United States; Not Your Typical Month 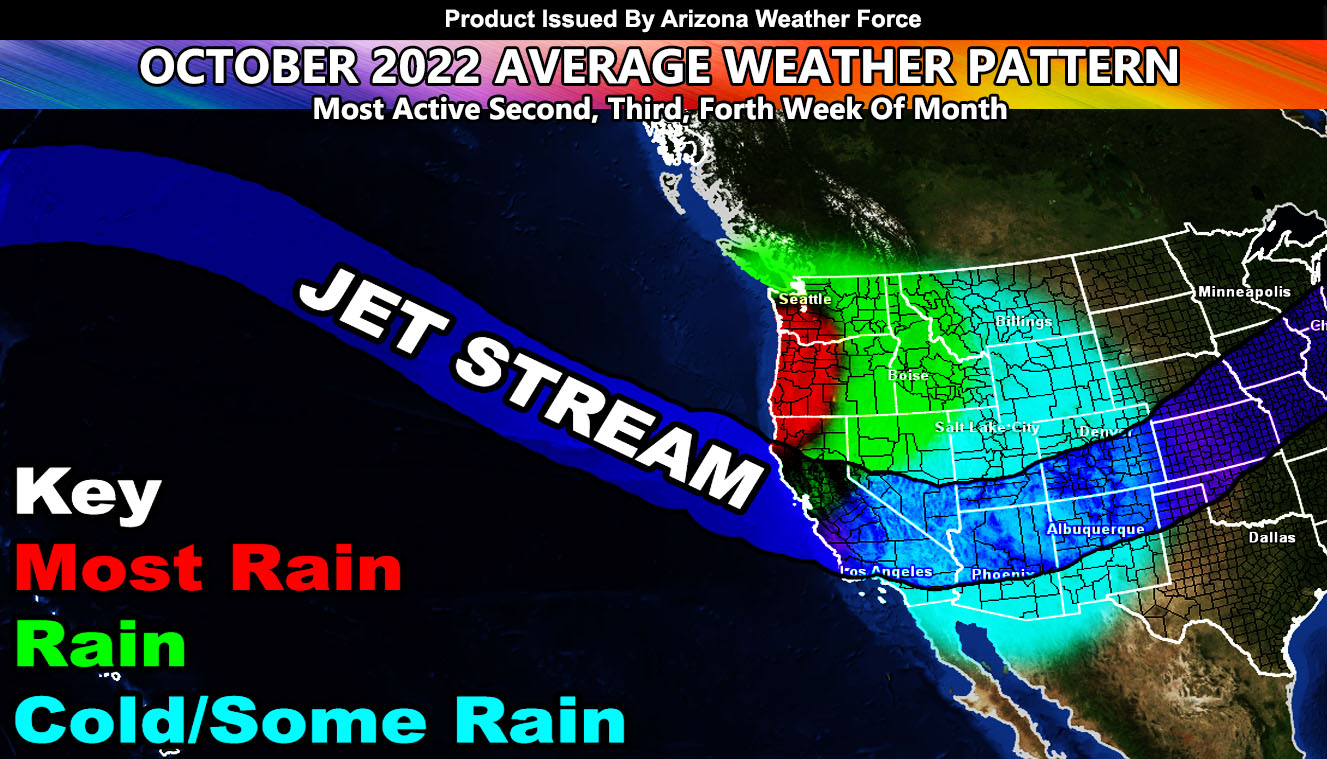 How to get these alerts with a premium supporter subscription via e-mail by micro-climate zone AND/OR Get the GPS models for this event on your device enabled? If you read this from the website or social media links, this option is the best to go so you get them delivered every single time without having to look for them (100 percent delivery time) https://arizonaweatherforce.com/arizona-weather-force-membership/

The Southwestern United States is starting out like a normal October, with Arizona getting the storms and most of Southern California getting fall temperatures and drier air.  This will change soon.

For your Monday expect an increase in storm coverage across Arizona, mainly the northern half of the state, including the Havasu areas, east and southeast state.  There is a chance of storms in my forecast for any outflow off the Mogollon Rim into the Phoenix/Pinal zones later in the period.

A mini-heatwave is expected to hit inland Southern California over the next 3-7 days with a developing ridge of high pressure overhead.  This will continue to also bring storms to Arizona and even the return of moisture/storm patterns into Southern California during the second/third week of the month.  This also will bring a breakdown of the ridge and cooler temperatures for the region.

At this time, I am going to go with below average temperatures for the region, average near the Southern California coast, and average precipitation for the entire area.  Colder Octobers on average is pretty rare, and does not exactly own up to a La Nina Pattern.

The pattern that is responsible would be the warmer water in the Northwest Pacific Ocean and warmer water in the Northwest Atlantic Ocean as well.  This will result in the jet stream having an average of a trough to the west of California and this would mean two things – Deeper troughs for lower temperatures, and the better chance of rainfall due to tropical moisture out of the south being pulled northward.

In terms of the fall averages for precipitation in a scientific form of verifying the Southern California season, 1.12″ of rainfall will be needed before November 30th in Downtown Los Angeles in order to have an average fall.  However, I stated we would have an above average so I expect more rainfall than the 1.12″ of rainfall we need before the allotted time.

One thing that will be noted is that this pattern does not favor the hot Santa Ana Winds as much as I normally would see.  Cold Santa Ana Winds start in November with October being when the major fire storms hit due to both the combination of heat+wind.  This month looks like it will mainly pass without anything major like that across Southern California.